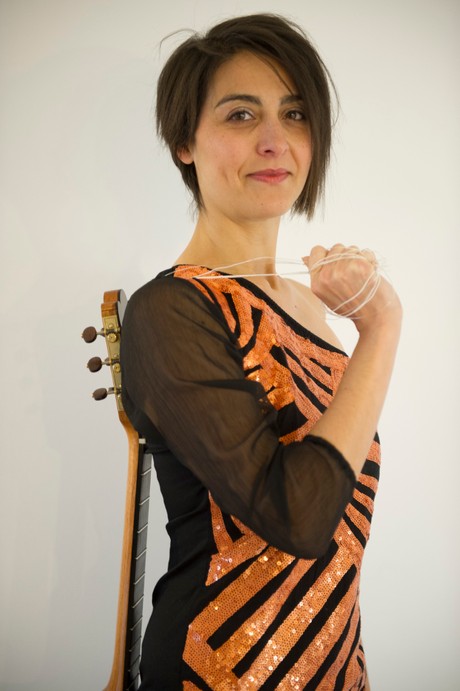 Cinzia Milani began studying classical guitar at a very young age and after private studies, graduated from the Conservatorio "A Boito" in Parma at the age of 18.   She has studied with many teachers and developed her guitar technique with the distinguished guitar master Mauro Storti, subsequently going on to study interpretative analysis with the Argentinian composer Oscar Roberto Casares.

When Cinzia Milani was only 5 years old she won the international competition of Milan. Also, at the age of 7 she was awarded the "Ambrogino d'oro" by the Municipality of Milan for her extraordinary and precocious musical ability and at the age of 10 she won the "Trofeo Beniamino Gigli" in Recanati, was marked 100/100 points.

In 1991 in Parma, Cinzia Milani was awarded the "Premio F. Margola" for best execution and interpretation.

By the age of 12, she began her concert career in Italy and went on to perform all over the world: United Kingdom, France, Spain, The United States, Canada, Mexico, South Africa, Indonesia, South America.

By the age of 14 Cinzia Milani had already won sixteen first prize in International and National Competitions.

Cinzia Milani caught the attention of British and American press, which defined her as "a rare combination of beauty, grace, natural elegance..." and as having "a deep sense of music with a brilliant technique and a powerful sound and expression, considered among the best exponents of the concert artists in the world..."

Cinzia Milani has already amassed an impressive discography: in addition to recording for Rai Radio 2 and Antenna 3, in 1994 she has collaborated with composer A. Prandi to catalogue previously unpublished music for the guitar. Meanwhile, tracks from her CD "Ritratto di Donna", recorded for the Jump Musical Edition label, have been broadcast on RAI in Italy as well as on French, German and Japanese national television stations and films.

Cinzia has also performed as a guitarist, dancer and singer in the argentinian show called "Sonatango" and later recorded a CD with the same name.  Also she recorded the cd "Guitar", Amadeus Label, Italian music by Castelnuovo-Tedesco, Margola, Domeniconi, Prandi, and also pieces wrote for her by the composers Cacciola and Betta. She has performed around Canada and the United States and she has taught guitar masterclasses at Royal Conservatory of Toronto.

She then went on to create a show called "Venere" consisting of music composed and performed live by her, in collaboration with the dance company "Performing Danza". This show represents the feminine universe told through music and dance.

She's working on a women project dedicated to great composer, concertist guitarist of last century. The cds containing First World Recording. The first cd released was "A Tribute to Ida Presti", a great project Brilliant label: works for solo guitar by Ida Presti and works by others composers written to Ida. She performed on stage with the Ida Presti's guitars : Gomez Ramirez 1934 & 1936. The "Classical Guitar Magazine" nominated the video of "Danse Rythmique" by Ida Presti played by Cinzia Milani "video pick of the week".

The second cd of that collection is "A Tribute to Teresa De Rogatis", works for solo guitar. International press describe it "this is the great merit of operations like that of Cinzia Milani: these two tributes, which I hope will continue to follow, show the presence of new musical territories unjustly left behind and almost forgotten by critics and music education short-sighted and regressive. This is the contemporary key to the work of Cinzia Milani. Her almost archival research has created a new artistic path that draws abundantly from the past, presenting it in a new light. It's a work of revitalization, of revisitation, of stylistic revival. Hightly recommended".

In addition to her career as a guitarist, she plays the violin and has played in various orchestras in Italy, Spain and France.

She is testimonial of "Royal Classics Strings" and "Bam cases".